To sum it all up: 1. A peace-pursuing president with a saxophone, bad for Israel and beloved by Hollywood, who signed an “historic” agreement and turned North Korea into a nuclear threat. 2. A pro-Islamic president, who hates Israel and is worshipped by Hollywood, signed an “historic” agreement with Iran, received a Nobel peace prize and almost turned the entire Middle East into one big nuclear threat. 3. A brash president, good to Israel, detested by Hollywood, who
56 views0 comments
Moshe Feiglin, Chairman of Zehut

We are watching history unfold. President Trump is leading the world on a series of strategic changes that are truly momentous. Prime Minister Netanyahu, a brilliant tactician, knows how to work with him - and simultaneously with Putin – admirably. When it comes to tactics, nobody does it better than Netanyahu. The truly amazing events of the past week reminded me of former Prime Minister Yitzchak Shamir. In my eyes, Shamir was the best rightist Prime Minister that Israel has
26 views0 comments
Shmuel Sackett

Never Leaving, No Matter What!

Yes, I agree that President Trump’s decision to end the Iran deal was a good thing, even though I knew exactly what it meant for Israel. Within minutes of Trump’s speech, the IDF Chief of Staff announced that the army had been put on high alert. Reserve soldiers were called to serve in their units and bomb shelters in the north were “open for business”. A time like this is very serious for Israel. Hundreds of thousands of lives are in danger and, if Nassrallah (the leader of
88 views0 comments
Moshe Feiglin, Chairman of Zehut

The Mask is Off

The most important thing that took place this past night, when Israel forcefully retaliated against a broad range of Iranian targets in Syria, was that the masks were removed. There is no longer that opaque area in which Israel does not officially announce that it attacked. As of last night, Israel defends itself with its face uncovered. I salute the IDF, I salute our brave IAF pilots and I salute the Prime Minister. Yesterday, Russia celebrated its Victory Day over the Nazis
66 views0 comments
Admin

Moshe Feiglin on President Trump’s announcement of US Withdrawal from the Nuclear Deal with Iran:

President Trump’s withdrawal from the nuclear deal with Iran is the best thing that could have happened to Israel at this time. Until now, Iran was able to develop nuclear capabilities below the radar, with the help of a security umbrella upheld by the international community. Now, with the Mossad’s revelation of Iran’s continued nuclear development, the international community can no longer bury its head in the sand. There are no more illusions. Trump’s withdrawal from the d
112 views0 comments
Moshe Feiglin, Chairman of Zehut

The Emperor Who Had No Clothes Marches Again

Do you know the joke about the guy who murdered his parents, and then begged the court for mercy because he was an orphan? Who brought us the miserable nuclear agreement with Iran, if not Binyamin Netanyahu? It was his policy that transferred responsibility to deal with Iran’s nuclear program to the US. And when Obama and the ayatollahs met to discuss the deal, Netanyahu found himself on the wrong side of the door. After I give a speech, if someone comes over to me and says,
381 views0 comments 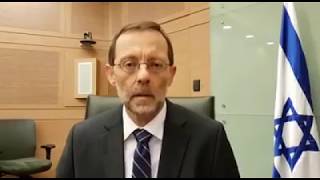 The Israeli attack against Iran - that never happened - must be analyzed from a broad, strategic perspective. When Iran built the plutonium reactor, Israel had a golden opportunity to attack a relatively easy target – as opposed to the underground nuclear enrichment facilities in Iran. Even if the outcome had been partial, the strategic meaning would have been that Iran is inside the legitimate borders of Israel’s reach. Passing the responsibility for Iran’s nuclear program t
49 views0 comments
Admin

The following are translated excerpts from Moshe Feiglin’s Facebook Live session on Saturday night, 16 Adar/March 3, ’18. The Left and the Right in Israel are at each other’s throats, and they do not understand how serious our security situation is. There are well over 100,000 missiles aimed at Israel right now, and as we know, a gun that makes an appearance in the first act, will shoot by the third. The world today is like a barrel of gasoline, with the leaders dancing aroun
44 views0 comments
Moshe Feiglin, Founder of Zehut

The lesson from the downing of Israel’s F-16 fighter jet by an old Syrian anti-aircraft missile is that we must never, never, never allow small-minded politicians to surrender strategic assets acquired with the blood of our soldiers over the decades – while hiding behind the technological fig leaf, and the trite: “The IDF will know how to deal with every threat”… When a small-minded politician named Ehud Barak surrendered to leftist broadcaster Shelli Yahimovitz and the left
88 views0 comments
Moshe Feiglin, Chairman of Zehut

Not Because of Corruption

When a famous rabbi joins the agenda dictated by Netanyahu nemesis Eldad Yaniv, he doesn’t turn himself into a soldier in the service of morality. Just the opposite. He and those who follow him turn themselves into soldiers in the service of the disgusting manipulations of the most filthy, despicable creatures in our midst. The same rabbi supported executing the orders to drive the residents of Gush Katif from their homes. In other words, he indirectly enabled the moral abomi
49 views0 comments 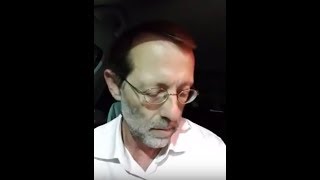 Who is the Enemy and Who Are We? Moshe Feiglin Q&A on Facebook Live

Why is Netanyahu Making a Scene?

A decade ago, the world held its breath in anticipation of an Israeli strike against Iran, modeled after its strike on the nuclear reactor in Iraq. Then the threats and speeches from every possible podium began. In practice, the responsibility of Israel’s government for the security of its citizens was passed on to the US, in the hope that they would attack Iran instead of us. But the Americans are not pushovers. They decided to employ sanctions and harnessed the free world t
64 views0 comments
Moshe Feiglin, Founder of Zehut

The Existential Threat on Israel's Border

The following are excerpts from Moshe Feiglin’s Facebook Live session on Wednesday, 15 Elul/Sept. 6, ‘17 It is not politically expedient to be a prophet of doom. But an existential threat against Israel is gathering steam. Instead of talking about it, the PM is talking about how he is being hounded by the investigations against him. Somebody has to talk about the threat building up against us. Until now, my strategic forecasts have been quite accurate. When I see something c
82 views0 comments
Moshe Feiglin, Chairman of Zehut

Netanyahu is doing what he does best – he is making speeches. What should have been done long ago – he is not doing. And he will not be doing it. His speech after the UN Security Council vote reminded me of his speeches against Iran. A very leader-like pose, no substance and transfer of responsibility for Israel's security to the US. The Iran fiasco resulted in US-Iran negotiations, with Netanyahu trying to eavesdrop on the discussion room. Entirely reminiscent of Czechoslova
156 views0 comments
Moshe Feiglin, Chairman of Zehut

Should Israel Intervene in the War in Syria?

The right hemisphere of the brain says, "Bury your head in the sand." After all, the second side in the Syrian conflict would be committing the same atrocities if it only could. We are talking about extremely violent people. Furthermore, if they had the opportunity, G-d forbid, both sides would be thrilled to rape, murder and burn us – like they do to each other, at the very least. So let them kill each other and we'll just keep quiet. The left hemisphere of the brain says, "
141 views0 comments
Moshe Feiglin, Chairman of Zehut

Both of them are Catastrophes

The two people more responsible than anyone else for the fact that the Nation of Israel cannot sleep soundly at night are Former PM Ehud Barak and PM Binyamin Netanyahu. They really do not have to leak secret information about each other, as they did last week, for us to understand that. Both of them are the greatest security catastrophe that Israel has ever known. When Ehud Barak was prime minister, he caved in to (former radio broadcaster and current Labor party MK) Shelly
9 views0 comments