Should Israel Boycott the World Because of the Holocaust?

The truth is that in depth, World War II was the war of the world against the Jews. Hitler, may his name be blotted out, did not need territory. The territorial issue was secondary. From the first moment and until the end, the German angel of death unequivocally declared that the enemy was the Jews and that they were the target of the war. On the other side, both the Red Army and the Allies were not about to waste one bullet in order to stop the German death machine. Hitler u
38 views0 comments
Moshe Feiglin, Chairman of Zehut

Holocaust Day is Jewishness Day. In the cattle cars to Auschwitz, the western, assimilated Jews suffocated together with the extreme Ultra-Orthodox Jews of the East. When the doors of the cattle cars opened to the smoke rising from the chimney, the westerners understood that in this place, their medals of honor from World War I would not help, nor would their civic identity. The easterners understood that here, their religious identity would not be enough. They took their nam
40 views0 comments 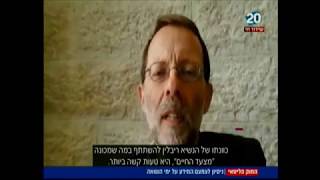 Moshe Feiglin on Reshet Bet Radio : Make Memory of Holocaust Meaningful by not Marching There

(The following are translated excerpts from an interview on Reshet Bet Radio, 26 Nissan,5778/April 11, ’18) Good morning to the Chairman of the Zehut party, Moshe Feiglin. It is almost Holocaust Memorial Day and this year, Poland has been trying to change the narrative that is in our collective memory, which somewhat blames the Poles for their cooperation under the German conquest. I think that the Polish Law is our fault. It was legislated through the legs of the Israeli mar
31 views0 comments
Moshe Feiglin, Founder of Zehut

I don’t understand why we don’t remind Poland of the pogroms after the war. The tens of Jews who were slaughtered in Kielce in 1946. And there were other slaughters, as well. A Jew who returned to Poland after his liberation from the concentration camps was taking his life into his hands. Not because of the Russians. Because of the Poles. True, there were righteous Poles who saved Jews. And it is true that the organized and industrialized murder of the Jews was perpetrated by
26 views0 comments
Moshe Feiglin, Founder of Zehut

Poland and Memory of the Holocaust

Poland’s recent legislation outlawing linking Poles to Nazi crimes has created quite a stir in Israel. Personally, I have always opposed school ‘Holocaust’ trips to Poland and have written a number of articles on the topic. Perhaps now, after the Polish parliament passed this bill, it will be easier to explain. The cursed soil of Poland is soaked with Jewish blood – more than any other land. It is no coincidence that the Germans chose Poland as the central site for their dea
79 views0 comments
Moshe Feiglin, Chairman of Zehut

The Most Dangerous Form of Holocaust Denial

I once gave a lift to a young woman who was a guide at the Yad Vashem Holocaust Museum in Jerusalem. “Na’ama,” I asked her, “What do you answer when your groups ask you about the meaning of the Holocaust?” “That everyone has a small Nazi inside them,” she answered automatically. “Anybody can be a Nazi.” I almost lost control of the car. “Listen,” I said to her. “I do not have any little Nazi inside me. I am the good guy in this story. And the Germans were the bad guys. Forg
754 views0 comments
Moshe Feiglin, Zehut Chairman

Confusing the Nazis and their Victims

The significance of the remarks that Deputy Chief of Staff Yair Golan made at the Holocaust Day Ceremony is very clear. There is no other way to understand them: “The soldier who shot the terrorist in Hebron and those who support him are our Nazis.” I am appalled by the fact that the cloned senior IDF officers see no problem with his words. They don’t even begin to consider that perhaps it is their tool box that is damaged and lacking. Maybe there is a different lesson that
4 views0 comments
Moshe Feiglin

What Will I Answer?

Each of us has a holocaust hiding in the closet. For the religious, it is that G-d turned His back on them. For the intermarried, it is that enlightenment refused to conceal the fact that they were Jews. We all stand bare, on the edge of the unsolved pit. Everyone and his holocaust. From the edge of that pit we crawled and a state was established. We thought it would answer our questions. The religious thought that the Mashiach was just around the corner. The secular thought
9 views0 comments