Israel National News: Moshe Feiglin: 'I am convinced many will follow in my son's footsteps&

https://www.israelnationalnews.com/News/News.aspx/249805 Zehut party chairman and former MK Moshe Feiglin gave full backing to his son Avi, a soldier in the Kfir Brigade who uploaded a Facebook post calling to refuse orders that place soldiers’ lives in danger so as to minimize harm to Arab rioters. Following the post, Avi was tried and dismissed from his combat position. "My son Avi received 10 days conditional imprisonment and was removed from combat duties, but I want to t
35 views0 comments 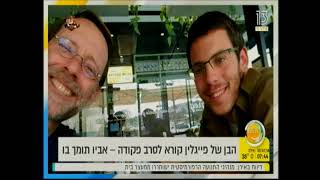